Avoiding Masking and Summing of frequencies by Panning

Masking and summing of frequencies are a real headache when it comes to gain staging your mixes. One potent way to rectify these issues is to use panning. Let me show you how easy the process is.

Avoiding Masking and Summing of frequencies by Panning is a detailed video tutorial that explains how to avoid the pitfalls of masking by using panning.

One of the biggest problems facing producers is that of frequencies that are masked and those that are summed. It’s a two-pronged problem that can be remedied with a single process – that of Panning.

Some weird things happen in music and especially when it comes to our perception of sounds within a mix context.

Auditory masking takes place when one sound is affected by the presence of another. Although this pertains to two sounds playing at the same time it is a bit more involved than one sound hiding another. It is quite obvious that if you play a sound that shares the same frequencies as another sound but quieter the louder sound will mask the quieter sound, but auditory masking is a bit more complex in that our perception of the balance of a mix changes because one sound seems to dominate another sound only because it is played at the same time. A classic example of this effect is when you try to mix a bass sound with a similar sounding kick drum. Just as you turn the volume up on one sound the other starts to disappear and vice versa. So, it takes some trickery to get the two sounds to sit together.

When identical frequencies that exist in two different layers (channels) are combined, you invariably get a gain boost at those frequencies.
If you take two sine waves of the same frequency and amplitude, and sum them you will get a gain increase of 6dB (example below). 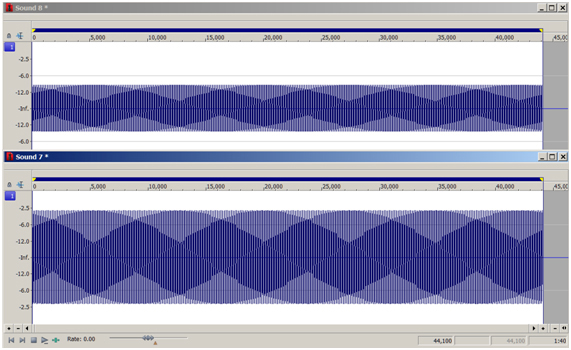 The waveform on the top is at ‑9 dB, and when duplicated and summed into a new single mono file we get a value of ‑3 dB. This is important information to take on board and nail into your brain: you can imagine what happens when you have a mix with a huge number of channels all summing and clipping the output simply because shared frequencies are always summed at the output.

So, how does this help us with regards to masking and summing?

The first port of call for a producer faced with these problems is to turn to the pan-pot in the DAW or mixer. By moving one sound away from another within the stereo soundstage we eliminate masking and summing in one hit.

Other video tutorials you may find useful:

The Pan Law within your DAW explained in detail

Summing in a Mix within your DAW