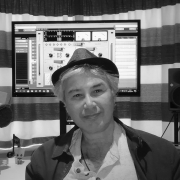 About Eddie – your new tutor

‘I love everything to do with sound, be it sound design or audio production and my goal here at Samplecraze is to share that passion and knowledge with you.’

Eddie’s professional musical career started during his teens, when he became a programmer for some of the most notable Electro/New Wave and Dance/Rap bands of the time, including AON, DJ Shadow, Juice, Pet Shop Boys, Spandau Ballet, C Campbell, Bobin, Paul Dee, Jets Orchestra, DJ Krush and many more.

He is currently involved in various production, remixing and sound-design projects, as well as sharing his knowledge by teaching workshops and providing online tuition through Samplecraze. Eddie has also been a contributing writer for Sound on Sound, and has published several books on audio technology.

Mixing to a Pink Noise Reference

Eddie has that rare combination of creative thinking and technical understanding, that allows him to sculpt sounds at will, while the rest of us hunt through stacks of samples and presets. He’s a true genius and his products have enhanced my work beyond measure.

Eddie Bazil’s knowledge of all aspects of modern production is full of real world insight and depth earned from a lifetime in the industry. From beat construction to sound design, his tutorials are easy to grasp yet incisive and always, always relevant to today’s producers. He’s a mine of information and the advice and training products found on his Samplecraze.com site totally reflect his no-bullshit approach! Highly recommended.