Does what it says on the tin. By adding one or more basic and simple waveforms together and their harmonics you create a complex waveform. However, you need to add an enormous amount of harmonics to create the simplest of sounds and this type of synthesis can be complicated to create in the form of a synthesizer but the Kawai K5000 does exactly that. You can create extremely rich textures or wild and crazy sounds on this beast. Personally, I love additive synthesis but then again I am receiving very intense therapy. The process of additive synthesis is also referred to as summing the waveforms and harmonics. This method adopts Fourier analysis. Described as the representation of a sound’s frequency components as a sum of pure sinusoidal waves. An analysis of a sound’s frequency components is taken at a steady state to give an approximation of that sounds spectrum. As most natural sounds are spectrally dynamic, one single Fourier analysis could not possibly represent a sound in sine waves. By ‘windowing’, a Fast Fourier Transform (FFT) takes several of these approximations and strings them together to better predict a sound’s spectrum over time. Although this is daunting to take in it is crucial to know and I don’t expect you to understand Fourier analysis but just thought I would bring it in now as we will come back to this at the advanced stages of these tutorials.

This process involves the generating of complex waveforms and then filtering the frequencies so that you are then left with the sound you want. You take away the frequencies. Obviously the filters are crucial in subtractive synthesis and the better the filters and the wider the choice of filters available, the better the end result will be. When I teach students I find Subtractive Synthesis to be the easiest and most logical introduction to sound design.

The output of one oscillator (modulator) is used to modulate the frequency of another oscillator (carrier). These oscillators are called operators. FM synthesizers usually have 4 or 6 operators. Algorithms are predetermined combinations of routings of modulators and carriers. To really explain this I would have to go into harmonics, sidebands, non-coincident and coincident series and the relationships between modulators and carriers. So I won’t go there. What I will say is that FM synthesis can create lovely digital types of sounds, from brittle to lush. A little bit of info for DX owners, is that the oscillators on these synthesizers were all sine waves.

This form of synthesis simulates the physical properties of natural instruments, or any sound, by using complex mathematical equations in real-time. This requires huge processing power. You are not actually creating the sound but, you are creating and controlling the process that produces that sound. Waveguides and algorithms come into this process heavily but, again, I won’t go into that as it would complicate issues and confuse you. What I do find interesting is that the Nord Lead uses PM synthesis to emulate an analog synthesizer. Weird huh?

This type of synthesis takes short attack sampled waveforms called PCM, or Pulse Code Modulation and combines them with synthesized sounds that form the body and tail of the new sound. By layering these and combining them with the synthesized portion of the sound you arrive at the new sound. The final sound is processed by using filters, envelope generators etc. This is one of the most common forms of synthesis used in the 90s and even today. Roland was the most famous for adopting this type of synthesis and the D50 was one of the most common of the synthesizers that used LA synthesis. By the way, a great synthesizer and still used today.

This form of synthesis incorporates the use of pre-recorded digitized audio waveforms of real or synthetic instruments. The waveforms are then stored in memory and played back at varying speeds for the corresponding notes played. These waveforms usually have a looped segment which allows for a sustained note to be played. Using envelopes and modulators, these waveforms can be processed and layered to form complex sounds that can often be lush and interesting. The processes are algorithmic and memory is crucial to house the waveforms. I could get into linear crossfading sequentially, quasi-periodic and sine functions etc. But I won’t. I care about your sanity.

This is the method by which tiny events of sounds (grains or clouds) are manipulated to form new complex sounds. By using varying frequencies and amplitudes of the sonic components, and by processing varying sequences and durations of these grains, a new complex sound is formed. Simply put, this form of synthesis creates some crazy and interesting sounds.

This method of synthesis incorporates the combining and processing of digital waveforms. Using PCM samples, effects and filtering this method of synthesis can create stunning sounds, from lush and evolving pads to strange stepped sequences. Korg made the famous Wavestation range of synthesizers and these were based around the Sequential Circuits Prophet VS. Working off a 2-dimensional envelope using an X and Y axis (joystick) and 4 voices, this synthesizer also had wave sequencing, playing a loopable sequence of PCM samples in a rhythmic and/or crossfaded fashion. The idea was to be able to crossfade 2 or more waveforms using the joystick. Freaky but incredible.

Synthesizers used to be categorized into 2 categories, analog and digital, but in the modern world, we have the hybrid digital-analog synthesizer. Confused? Don’t be. It actually makes good sense. Whether the processing is digital or analog, the sounds are produced in much the same way, albeit with different terminology and some different routings. A good example of the terminology being adapted is: VCO, voltage controlled oscillator becomes a DCO, digitally controlled oscillator.

Of course, with today’s influx of synthesizers, be they analog, digital or a hybrid system, we are offered many varying forms of synthesis, from granular to transwave and so on.

Ultimately, synthesis is about sound design and manipulation and we now have fully fledged systems whereby effects are incorporated into the signal matrix, dynamics at the output stage and modulation matrices that make modular synthesizers look primitive. But would I swap a modular synth for a hybrid plugin? Hell no! 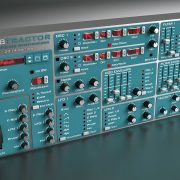