A basic guide into how Reason’s Subtractor works.

Let us start with the sound generation engine of Subtractor.

These are the oscillators.

Subtractor has 2 oscillators.
Each one has 32 waveforms but you only need to concern yourself with the basic 4 waveforms as these are your raw waveforms and the balance of the waveforms are simply varying harmonic versions of the main four.

The first waveform is:

Saw waveform, or sawtooths as they are more commonly known, have a rich and bright, edgy sonic quality about them and are great for creating strings, brass, huge Trance pads, searing leads and electro basses. Of course, there is, as with all the other waveforms, far more to it than that, but, as I said, I just want you to get a general idea of what these waveforms are used for and how they sound. The real fun starts when we start to layer them or trigger one with the other, but that will come later when we get into synthesis.

Square waveforms are great for brass and deeper wind type of instruments and are usually used along with other waveforms as they are quite strong and hard on their own. But they are invaluable as are the rest listed above.

Square waveforms look like a bunch of squares with their tops and bottoms missing and alternatively.

Triangle waveforms are great for bell-type sounds or wind type sounds like flutes etc.and I regularly use them for the FM type of sounds that you hear on Yamaha DX7s or FM7s, great and very useful.

These waveforms look like triangles so that makes life easier.

Sine waveforms are great for creating deep warm basses or smooth lead lines. They can be used to create whistles, layered with kick drums to give that deep subby effect. In fact, the sine wave is a pure waveform and the harmonic content is fundamental. That means that almost all other waveforms are created from sine waves.

The sine is a nice smooth flowing waveform.

The rest of the waveforms, from 5-32, are variances on harmonic content and shape structures. This basically means that certain waveforms are created with certain characteristics in mind. For example waveform 11 has been created for designing voice-like sounds, waveform 8 has been created with clav sounds in mind. Each waveform has it’s own attributes and therefore a great starting point for your sound design needs.

OSCs generate waveforms and pitch and these are nicely displayed next to the OSCs in their section. Oct is simply a shift in pitch by octaves either down or up.
Semi deals with semitone shifts and this is the standard 12 up or down which makes up one octave.
Cents are 100th fractions of the semitones.

Each oscillator has it’s own Phase knob and a selector button. The Phase knob is used to set the amount of phase offset, and the selector switches between three modes:

When phase offset modulation is activated, the oscillator creates a second waveform of the same shape and offsets it by the amount set with the Phase knob. Depending on the selected mode, Subtractor then either subtracts or multiplies the two waveforms with each other. The resulting waveforms can be used to create new timbres.

Let’s take a simple saw wave example. Offset this slightly and use the subtract mode and you have now created a pulse wave. Pulse waveforms are great for many types of sounds.
Again, I suggest you read my synthesis tutorials to listen to and understand how certain waveforms sound and what they can be used for.

But my best advice in this tutorial is to simply play around and attune your ears to the different types of sounds that can be created by simply using the phase functions.
We will get deep into this in later tutorials when we come to creating pulse width modulated sounds etc.]

We now come to osc keyboard tracking.
This is an extremely useful little function.

If you deselect keyboard tracking or switch it off, then you will have a constant pitched oscillator. In other words, no matter which note you press, the same pitch is outputted. This is handy when it comes to creating non-pitched sounds like drum and percussive sounds, or special effects, where you do not want the pitch to be evident when you play up or down the keyboard.

Osc mix is the mix for both OSCs. Set it to the left and you only hear OSC 1, set it all the way to the right and you hear OSC 2, set it midway and both OSCs are heard.
The OSC 2 output mix is also important because both the ring modulator and noise generator are output through here.

Using FM can produce a wide range of harmonic and non-harmonic sounds.
The best advice I can give, short of a deep and emotional explanation, is to try this function out for yourself.
In fact, let’s try a simple example of FM in Subtractor.

To use OSC 2 you need to ‘switch’ it on by clicking on the little box above it.
Now select a waveform for OSC 1.
Let’s use a saw for OSC 1 and a sine wave for OSC 2.
Now set the FM dial to midway and the mix dial to halfway and play away.
Sounds nice and metallic huh?
You can vary the amounts, change the waveforms etc and later when we come to the mod matrix of Subtractor where we can route sources and destinations, you will find that we can create an endless array of sounds by simply changing what modulates what.

basically multiply two audio signals together. The ring modulated output contains added frequencies generated by the sum of, and the difference between, the frequencies of the two signals.
In the Subtractor Ring Modulator, Osc 1 is multiplied with Osc 2 to produce sum and difference frequencies.

Ring modulation can be used to create complex and enharmonic sounds.
Although this sounds emotional, it’s actually very simple to use.

Let’s try a little ring mod example.
Switch on OSC 2 and leave it at the default saw waveform.
Now turn the OSC mix dial all the way to the right as the ring mod is outputted on OSC 2.
Now switch on the ring mod icon and go to either OSCs semitone tuning section and move the values down a few semitones. You can immediately hear the ring mod sound being outputted.

We now come to the final part of the OSC section, the noise generator.
This can actually be viewed as a third OSC but it does not behave in the same way as the other two as noise is non-pitched.

are used more for effect than anything else but I find that they are fantastic for creating pads when used with other waveforms like saws and triangles.

You can also create great seashore wave types of sounds or huge thunder or even some great Hoover type sounds when used with saw waveforms. Hell, you can even create drum and percussive sounds with noise.

First off, in Subtractor the noise generator is internally routed to OSC 2, so if you switch OSC 2 on then the noise is mixed with the OSC 2 waveform.
By switching off OSC 2 and using only osc1 with the OSC mix set all the way to the right, you will only hear the noise generator and not OSC 1 or 2.
This sounds complex but is actually quite simple when you practice a little and we will do that right now.

So, use an initialised patch.
Move the OSC amt dial all the way to the right.
This will bypass OSC 1 ‘s waveform, and because OSC 2 is not switched on, the noise will be heard on its own.
Now switch on the noise generator by clicking on the little box above it till it lights up red.
You now have noise.

The three parameters are easy to understand and use.
Decay is simply how long it takes for the sound to die when you play a note. The less decay the shorter the sound. The more decay you use the longer the sound. It’s actually that simple.

is a little more involved.
If you move the dial all the way to the right, you will get pure or white noise. This comes across as a bright noise sound. Move it back towards the left and the brightness will fade. Move it all the way and you get a low-frequency rumble (great for waves and earthquakes etc).
Level is self-explanatory.

A filter is the most important tool for shaping the overall timbre of the sound.

The filter section in Subtractor contains two filters, the first being a multimode filter with five filter types, and the second being a low-pass filter.

If Filter Keyboard Track is activated, the filter frequency will increase the further up on the keyboard you play. If a lowpass filter frequency is constant (a Kbd setting of “0”) this can introduce a certain loss of “sparkle” in a sound the higher up the keyboard you play, because the harmonics in the sound are progressively being cut. By using a degree of Filter Keyboard Tracking, this can be compensated for.

Filter 2
A very useful and unusual feature of the Subtractor Synthesizer is the presence of an additional 12dB/Oct lowpass filter. Using two filters together can produce many interesting filter characteristics, that would be impossible to create using a single filter, for example, formant effects.

The parameters are identical to Filter 1, except in that the filter type is fixed, and it does not have filter keyboard tracking.

To activate Filter 2, click the button at the top of the Filter 2 section.

Filter 1 and Filter 2 are connected in series. This means that the output of Filter 1 is routed to Filter 2, but both filters function independently. For example, if Filter 1 was filtering out most of the frequencies, this would leave Filter 2 very little to “work with”. Similarly, if Filter 2 had a filter frequency setting of “0”, all frequencies would be filtered out regardless of the settings of Filter 1.

Filter Envelope Invert
If this button is activated, the envelope will be inverted. For example, normally the Decay parameter lowers the filter frequency, but after activating Invert it will instead raise it, by the same amount. 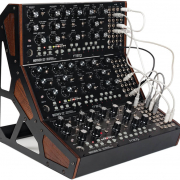